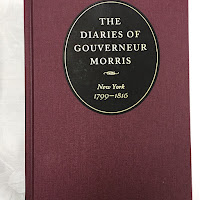 We are delighted to announce that The Diaries of Gouverneur Morris: New York, 1799-1816, is now out in hard cover. (University of Virginia Press, 2018, ISBN 9780813939797; http://www.upress.virginia.edu/title/4689). The volume contains Morris's diaries from shortly after his return to New York from Europe until his death in 1816.  In that time, Morris continued to be an active political figure, serving in the Senate, heading the commission that initiated the Erie Canal project, chairing the commission designing Manhattan's grid, establishing the northern New York towns of Gouverneur and Morristown, and opposing the War of 1812.  He also delivered the official New York eulogy for George Washington and gave the funeral address for Alexander Hamilton.

The diaries are extensively annotated and provide meaningful new information about this last chapter of Morris's life, permitting a much deeper comprehension of his contributions, his experiences, and his trials.  We believe they will provide a springboard for research in to such matters as the actual events leading to the origin of the Erie Canal; the nature of Morris's financial catastrophe and its cause; and his scathing condemnation of the diplomacy of Jefferson and Madison which led to the entirely avoidable (in Morris's view) War of 1812.

The new volume is also available in digital form on the University of Virginia Press ROTUNDA Founding Era website.