A piece of Morrisania comes to light: a mahogany table from Gouverneur Morris’s library

One of the most thrilling aspects of being an historian is when you get the chance to physically touch an item that in real life belonged to the person of your interest. Something she or he has touched, sat on, used, worked with. Diaries and letters written by that person have that effect too, but an artifact is even more moving.

On November 16, 1792, Gouverneur Morris, then America’s minister to France,  recorded in his account book the purchase of two mahogany tables, “one of them a Dressing Table.” He paid 216 pounds for the two tables: 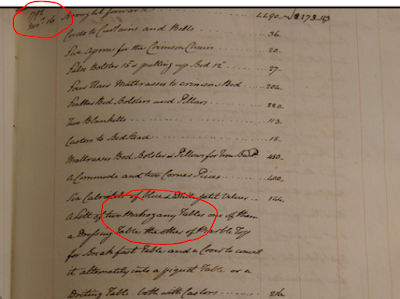 He did not indicate where he had bought them, but it is very likely that they were in a sale of items belonging to a distressed French aristocrat. The King had fallen three months earlier, and would be guillotined two months later, and aristocrats had been forced to flee France or face imprisonment and possible execution.  Morris bought quite a few pieces of furniture, beddings, curtains, etc. in these sales, and shipped them to his home in the Bronx. When he returned from Europe in December 1798, he started extensive renovations to the family mansion, which had suffered during the American revolutionary war.  Morris had purchased the house and land from his oldest half-brother Staats Morris before he had left for Europe in 1788.  He used his French aquisitions to furnish it in a grand style.

The editors were recently surprised and excited to learn that the dressing table had surfaced in the home of a private collector who had bought it at auction nearly 30 years ago; the table had been in the hands of Morris’s descendants until that sale.

This elegant but modest piece, with decorative brass, was made in France in the late 1700s though it may well have been the work of a German cabinetmaker; there were several German “ébénistes” at work in Paris, and though there is no apparent signature indicating its workshop of origin, its style indicates it could have very well have come from one of them. 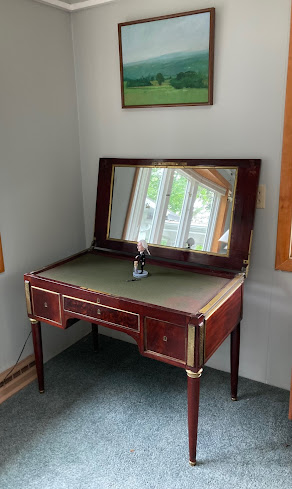 The table, with its lid open, showing the mirror, can be seen in this print of the Morrisania library, which appeared in an 1890 article in Art Journal about the Morrisania mansion.  at the New-York Public Library: 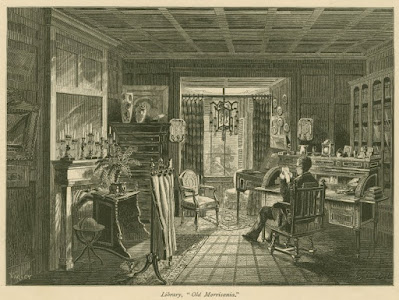 The prints in the article also show the reception room and front hall of   Morrisania, and several other items purchased by Morris (the large desk by the dressing table, a clock, etc.) are still known to be in existence.

It is thrilling to think that Morris probably looked at himself in that mirror.

Posted by Gouverneur Morris Papers at 1:29:00 PM No comments: