The editors were quite surprised recently to receive this remarkable picture: 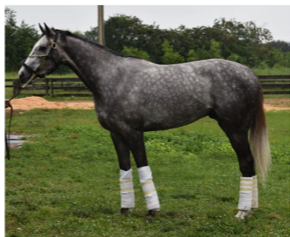 and were even more startled when they were advised that the name of this beautiful three-year-old race horse is none other than "Gouverneur Morris," aka "The Gouvernator."

The horse was christened by Mr. Ed Barker, a Morris enthusiast who lives in Bellevue, Washington. It seems that Mr. Barker conditioned his investment in a share on being allowed to name the colt.  Since the colt's sire was Constitution, Mr. Barker has taken the opportunity to introduce our favorite Founding Father into the national consciousness by a very unusual route.

His mission has so far gone extremely well:  Not only has the horse and the story behind his christening caught the interest of several commentators - see, e.g., this TV clip:  pic.twitter.com/amINixCcLg ;
-- but the horse itself has been running spectacularly well and may well run in the Kentucky Derby this year:  http://www.tampabaydowns.com/news/2020/02/14/gouverneur-morris-rules-in-2020-debut-morales-wins-three-again
If this is the case, our goal at the Papers will at last have been achieved, though by a route we editors never imagined: Gouverneur Morris will become a household name!

UPDATE July 26 2020:  Unfortunately, this wonderful horse contracted a serious case of colitis, an ailment that often kills young horses.  He recovered, though he will not be participating in the Derby.  His trainers believe he still has races to run, however.

Mr. Barker is going all out:  Here is a Tshirt he has had made: